Malawian musician Giddes Chalamanda had never dreamed in his 92 years that he might one day be famous enough to dine with the president followed by a night in a luxury hotel.

Last month the singer did both, thanks to his unlikely new stardom on TikTok, a social media platform beloved of youths four generations removed from him — and one he can’t access because he lacks a smartphone or even electricity to charge one.

Chalamanda’s ode to his daughter, Linny Hoo — a chirpy reggae tune with drums and synthesizers — got more than 80 million views on the video-sharing site, owned by China technology giant ByteDance. His fame launched his career locally, with multiple paid requests to perform live. 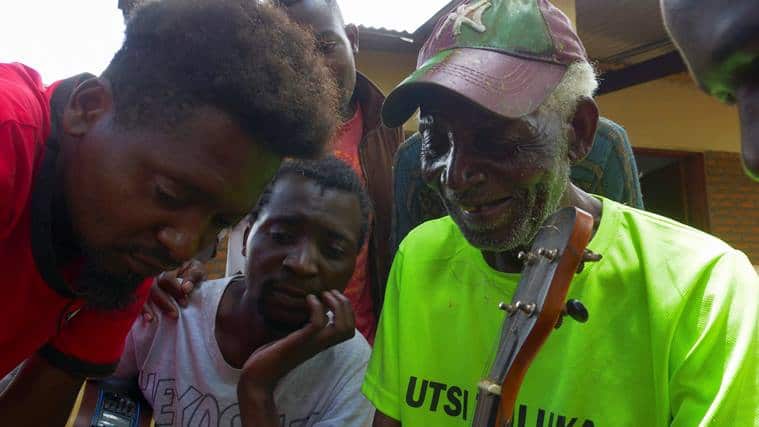 Giddes Chalamanda reacts as he watches his music video with neighbours and family members on TikTok. (REUTERS/Eldson Chagara)

Putting his small, lakeside southern African country on the digital map last month brought him to the attention of President Lazarus Chakwera, who threw a party for Chalamanda’s 92nd birthday at the State House in Lilongwe.

“I did not expect that I would be invited to State House. It was such an honour,” Chalamanda told Reuters at his red-brick home in his village of Chiradzulu, a green area of macademia and coffee farms 30 km (18 miles) northeast of the commercial capital, Blantyre.

“The President asked me about my opinion on Malawi’s music industry and the arts,” the singer added, before launching into a tune in his banjo.

He received a blanket and a pair of leather shoes from Chakwera, and they sang one of Chalamanda’s songs together: Azimayi a Malawi, which means ‘Women of Malawi’.

In his state of the nation address on Thursday, the president at one point said, “Ours is no ordinary nation. Ours is the home of the fine sounds of Giddes Chalamanda.” Giddes Chalamanda took odd jobs in the tobacco industry, playing guitar during weekends at bars. In the past decade, he did manage to perform in Germany and the United States. (REUTERS/Eldson Chagara)

Born in 1930 in Chirazulu, Chalamanda started playing music at the age of 12.

“I did not go far with school. The British colonial teachers … thought I looked too old to be in class,” he recalls — he doesn’t recollect how old he actually was then.

He took odd jobs in the tobacco industry, playing guitar during weekends at bars. In the past decade, he did manage to perform in Germany and the United States.

But he was overwhelmed by the popularity of Linny Hoo. The song, he said, carries “a message to young people to have good manners by assisting their elderly parents with household chores like sweeping the yard and drawing water.

“It remains to be seen how many of his millions of young viewers take that message to heart.