The data analysed by CNN-News18 shows that the deaths have increased by nearly 70%. The percentage share of pedestrians killed in road accidents has gone up from nearly 15% to about 18% between 2018 and 2020, the data shows.

In a written statement in the Lok Sabha, Union Minister Nitin Gadkari said the Motor Vehicle (Amendment) Act, 2019 was passed by Parliament to prevent road accidents and save lives.

“The Act focuses on road safety and includes hike in penalties for traffic violations, electronic monitoring of the same. The Act has enhanced penalties for juvenile driving, computerization/automation of vehicle fitness and driving, tests, recall of defective vehicles, streamlining the third-party insurance and payment of increased compensation for hit and run cases,” it said.

“The Amendment has strengthened the law to improve the road safety scenario and reduce loss of lives. However, no study on why pedestrian deaths happen is available or has been conducted. Generally, such deaths occur due to pedestrians not following norms laid down for walking along roads or trying to cross roads during traffic,” he said in the statement. 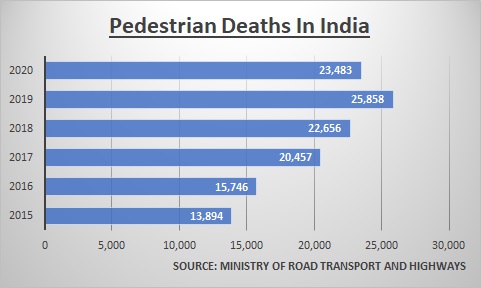 Gadkari also said that accidents also occur due to speeding.

The ministry informed that the Motor Vehicles (Amendment) Act, 2019 provides for a scheme for cashless treatment of victims of accidents during the golden hour.

Further, the National Highways Authority of India has made provisions for ambulances at all toll plazas on the completed corridors of national highways.