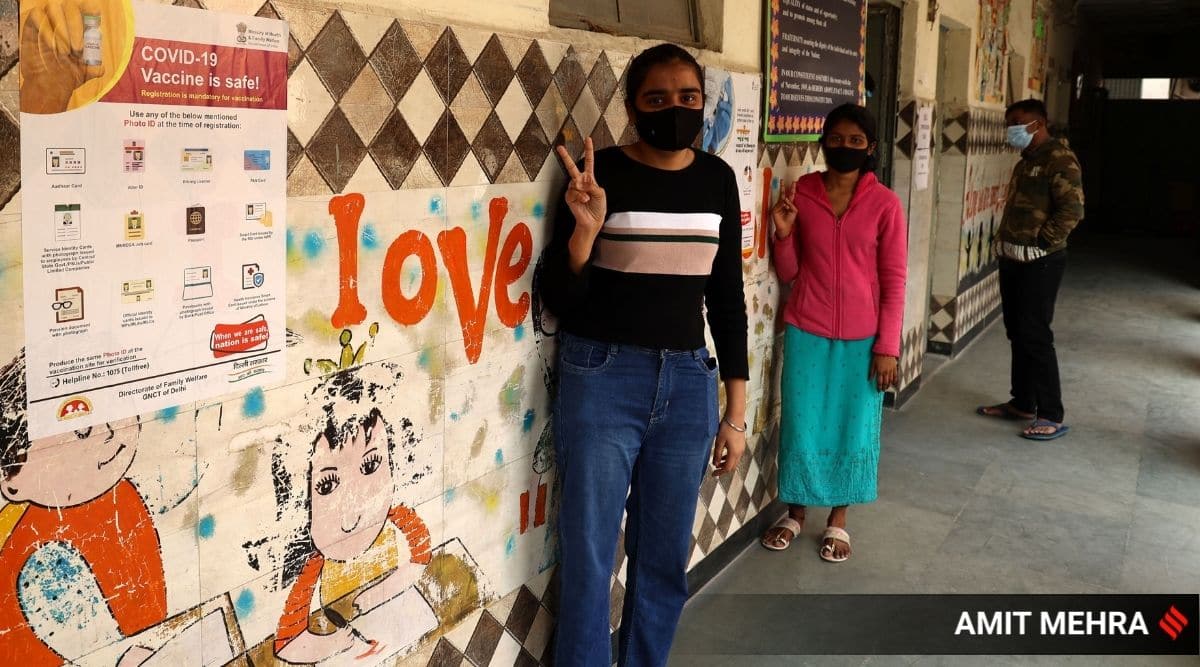 There were 21.7% of those who became eligible when the Covid-19 vaccination drive opened up. (Express Photo by Amit Mehra)

As many as 4,576 children received their second shot of the vaccine till Monday 6 pm in Delhi – accounting for 21.7% of those who became eligible when the Covid-19 vaccination drive opened up for the second dose in children between the ages of 15 and 17 years.

There were 21,029 children who had received their first shot on January 3, when the vaccination drive was opened for the age group, and became eligible for their second shot this Monday after completing the 28-gap period between two shots of Covaxin.

Hundreds of anganwadi workers and helpers on Monday gathered near Delhi Chief Minister Arvind Kejriwal’s residence to demand a hike in their salary. Their primary demands include that the honorarium of workers be increased from Rs 10,000 to 25,000, and of helpers from Rs 5,000 to 20,000 to account for increased workload and inflation. Their pay had last been increased in 2017.

From Monday, children in the age bracket of 15 to 18 years will start receiving their second dose of a Covid-19 vaccine. Delhi has around 10.14 lakh beneficiaries in the age group.

The Aam Aadmi Party (AAP) Sunday alleged that the BJP councillor from Sawan Park gave land, that was earlier used to dump waste, to an NGO owned by her husband.

AAP MCD in-charge Durgesh Pathak claimed, “The North MCD gave a land parcel in Ashok Vihar’s Keshavpuram zone to an NGO owned by one Rajendra Kumar. The NGO’s name is ‘Panchvati Social Welfare Society’. The most important fact is that this ward’s councillor is BJP’s Manju Khandelwal. And, Rajendra Kumar, the one who received this land, is her husband.”